Thalassemia is an inherited blood disorder in which the body makes an abnormal form of hemoglobin. Hemoglobin is the protein molecule in red blood cells that carries oxygen.

The disorder results in excessive destruction of red blood cells, which leads to anemia. Anemia is a condition in which your body doesn’t have enough normal, healthy red blood cells.

Thalassemia is inherited, meaning that at least one of your parents must be a carrier of the disease. It’s caused by either a genetic mutation or a deletion of certain key gene fragments.

Each of these forms of thalassemia has different subtypes. The exact form you have will affect the severity of your symptoms and your outlook. 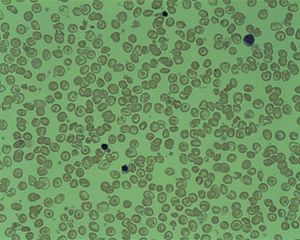 There are three main types of thalassemia (and four subtypes):

All of these types and subtypes vary in symptoms and severity. The onset may also vary slightly.

Thalassemia major is the most severe form of beta thalassemia. It develops when beta globin genes are missing. The symptoms of thalassemia major generally appear before a child’s second birthday. The severe anemia related to this condition can be life-threatening. Other signs and symptoms include:

This form of thalassemia is usually so severe that it requires regular blood transfusions.

Hemoglobin H develops as when a person is missing three alpha globin genes or experiences changes in these genes. This disease can lead to bone issues. The cheeks, forehead, and jaw may all overgrow. Additionally, hemoglobin H disease can cause:

Hydrops fetalis is an extremely severe form of thalassemia that occurs before birth. Most individuals with this condition are either stillborn or die shortly after being born. This condition develops when all four alpha globin genes are altered or missing.

People with thalassemia minor don’t usually have any symptoms. If they do, it’s likely to be minor anemia. The condition is classified as either alpha or beta thalassemia minor. In alpha minor cases, two genes are missing. In beta minor, one gene is missing.

The lack of visible symptoms can make thalassemia minor difficult to detect. It’s important to get tested if one of your parents or a relative has some form of the disease.

Thalassemia occurs when there’s an abnormality or mutation in one of the genes involved in hemoglobin production. You inherit this genetic defect from your parents.

If both of your parents are carriers of thalassemia, you have a greater chance of inheriting a more serious form of the disease.

Factors that increase your risk of thalassemia include:

The symptoms of thalassemia can vary. Some of the most common ones include:

Not everyone has visible symptoms of thalassemia. Signs of the disorder also tend to show up later in childhood or adolescence.

If your doctor is trying to diagnose thalassemia, they’ll likely take a blood sample. They’ll send this sample to a lab to be tested for anemia and abnormal hemoglobin. A lab technician will also look at the blood under a microscope to see if the red blood cells are oddly shaped. Abnormally shaped red blood cells are a sign of thalassemia. The lab technician may also perform a test known as hemoglobin electrophoresis. This test separates out the different molecules in the red blood cells, allowing them to identify the abnormal type.

Depending on the type and severity of the thalassemia, a physical examination might also help your doctor make a diagnosis. For example, a severely enlarged spleen might suggest to your doctor that you have hemoglobin H disease.

The treatment for thalassemia depends on the type and severity of disease involved. Your doctor will give you a course of treatment that will work best for your particular case.

Some of the treatments include:

Your doctor may instruct you not to take vitamins or supplements containing iron. This is especially true if you need blood transfusions. People who receive blood transfusions receive extra iron that the body can’t easily get rid of. Iron can build up in tissues, which can be potentially fatal.

If you’re receiving a blood transfusion, you may also need chelation therapy. This generally involves receiving an injection of a chemical that binds with iron and other heavy metals. This helps remove extra iron from your body.

In most cases, you can't prevent thalassemia. If you have thalassemia, or if you carry a thalassemia gene, consider talking with a genetic counselor for guidance if you're thinking of having children.

Did you find this helpful?

Your feedback will help us improve the product

Sorry, right now we are not available in your area